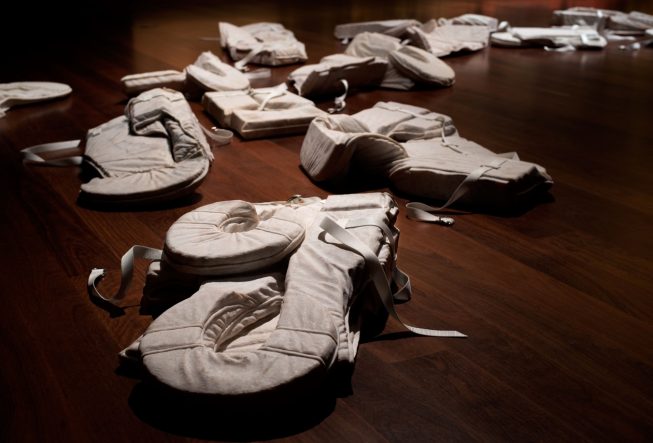 Join this conversation around what it means to have a socially engaged art practice. Presented in partnership with the Samstag Museum who are exhibiting The Ocean after Nature, and Countercurrents as part of the Adelaide Festival 2017.

Curator Gillian Brown will lead a conversation with Alex Seton, Angela Tiatia, and James Tylor who each have work in Countercurrents.

There is growing interest in a socially engaged art practice as more artists focus their work on making an impact on social issues, and perhaps a desire to move beyond existing definitions of both art and the political.

ALEX SETON’S artistic practice incorporates photography, video, sculpture and installation to investigate the complex relationship between form and substance. He is best known for his beguiling marble carving, applying his refined craftsmanship to unexpected forms. Blankets, hoodies, inflatables and national flags are rendered in stone, invoking a somatic paradox. By infusing the rich heritage of Classical statuary with contemporary concerns, Seton gives weight to the issues we face here and now.

GILLIAN BROWN is Curator, Samstag Museum of Art and the curator of the Museum’s Adelaide Festival exhibition Countercurrents.

As a multimedia artist, ANGELA TIATIA explores contemporary culture, drawing attention to its relationship to representation, gender, neo-colonialism and the commodification of the body and place. Her work has been exhibited in Cologne, Singapore, Los Angeles, San Francisco, New York, Mexico City, Honolulu, Sydney, Melbourne, Auckland and Wellington.