Reflections on the creative legacy of Pru La Motte 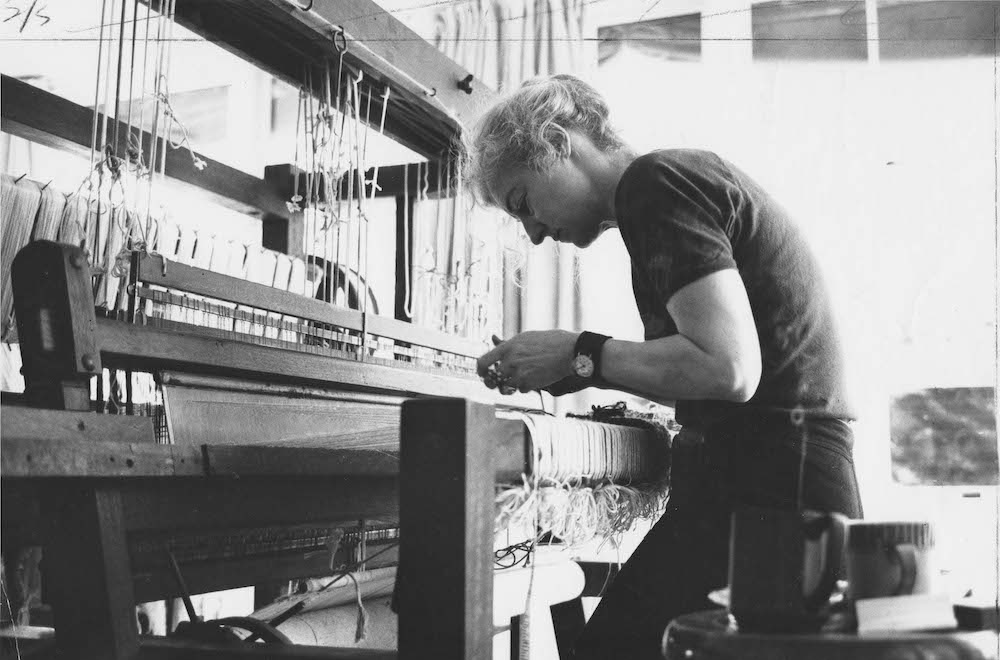 Widely recognised for her artworks, Pru La Motte was also renowned for her inimitable style. Always artfully dressed and walking with purpose, she attended book launches and art openings. She frequented the Central Markets and Chinatown, the places she loved in the City South West.

La Motte was one of South Australia’s great characters and advocates for Adelaide who sadly passed away on 22 March 2020. Living to 92 years of age, Pru La Motte led a remarkable life. She was born in Maitland, South Australia in 1928 and with her family moved to Adelaide as a child. She attended SA School of Art from 1944-1947 and started her creative career as an illustrator.

In the early 1950s, she met her husband to be Brian Medlin while working at Mary Martin’s bookshop. As Tim Lloyd commented in his obituary for La Motte, Mary Martin’s was ‘…the popular meeting place for forward thinking and unconventional Adelaide people at that time.’[1]

She married in 1953 followed by a move to Oxford, UK and extensive travel in Ghana, West Africa where she took great inspiration from the ceramic and weaving traditions. La Motte returned to Australia with Brian and their two young children in 1964 where her husband took up a University position in Brisbane. This is where she learnt ceramics from friend Milton Moon at the Queensland Art School.

La Motte’s passion however was for textiles and weaving. Her father had been a weaver and she commented in 1969, ‘He was a very good craftsman, but had no sense of design…I didn’t take much notice of his work as a kid, it wasn’t until I went to Oxford in 1958 that I took it up. I studied for two years at the Oxford College of Technology, with a marvellous old Scottish weaving teacher from the Outer Hebrides.’[2]

Critic Robert Ward said of her work, ‘The two and three dimensional shapes, with their layers of slashed, knotted, twisted and woven thread, are stridently colored in oranges, blues and reds, or softly muted in browns, beiges, and white. They loom like complex primitive avatars above the comfortable and benign works of her colleagues.’

La Motte who went by her married name Pru Medlin, became particularly prominent during the 1970s as part of the growing women’s art movement. Her tapestries were exhibited at galleries including Bonython Gallery in Sydney, Desborough Gallery in Perth, JamFactory in Adelaide, Art Gallery of NSW and Art Gallery of SA. She was also very active in the art community being a founding member of several groups and organisations including the newly formed Craft Association of SA (now Guildhouse).

She received significant coverage in SA and national press and magazines including Vogue and Women’s Day where Babette Hays wryly commented, ‘Pru Medlin is the only true bohemian I have met in Australia. There is no shortage of phonies but the real thing is rare. I can still see her wandering around her incredibly chaotic house – she’s not a great one for home duties – in a brightly embroidered long dradd, bare feet, her blond hair tied back in a bun.’[3]

At the end of the 1970s La Motte changed her name from Medlin, selecting a name from her mother. She was an artist who continually evolved and experimented with new forms and techniques and in the 1980s explored photography, film, politics, and sociology and completed two degrees at Flinders University. In the 1990s she became a prolific writer and returned to the painting and drawing she had left behind in the 1950s.

Working out of her cottage, which she called the ‘wombattery’, La Motte wrote journals and stories. She painted large-scale narrative oil paintings. Using satire to talk about female identity, masculinity and sexuality – forming the inspiration for her novel A Perverse Romance, self-published and launched just before her 90th birthday.

Her daughter Margie Medlin has returned to Adelaide after many years living in Sydney and overseas. She says reading her mother’s journals, ‘I wonder where she found the time. She wrote that she was weaving 12 to 14 hours a day. She thought of herself as an artist first and a mother second.’

La Motte instilled independence and creativity in her two children Margie and Barney, who have embarked on accomplished artistic and musical careers. Margie is currently based at her mother’s home preparing a substantial archive for a bequest to the Art Gallery of South Australia Research library.

Margie is undertaking archival and curatorial work to ensure Pru La Motte’s legacy lives on, including a retrospective exhibition of La Motte’s artworks to be held in the rooms of her former home, an intimate city row cottage. She says, ‘The retrospective is called A Way of Being and will bring together creative works from the 1960s to the 2000s. From large scaled coiled pots, to avant grade tapestries and garment design, to her paintings and art books. I am also working with Eileen Darley and Virginia Barratt to create a digital archive from Pru’s extensive photographs, newspapers clippings, letters and interviews.’

This unique exhibition will be an ideal opportunity to step inside the world of Pru La Motte and experience the lifelong practice of one of Adelaide’s most eclectic and passionate arts personalities. 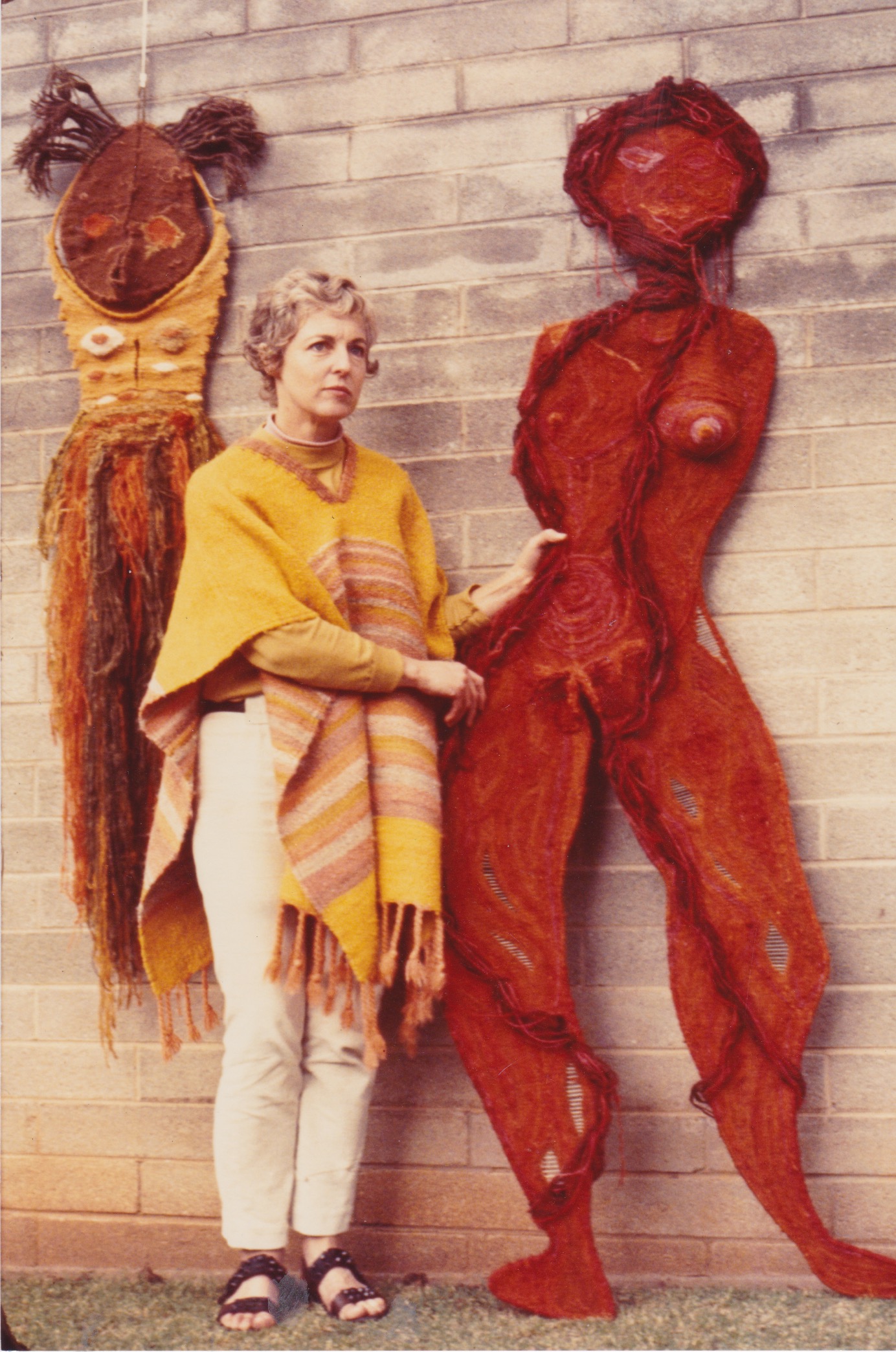 Pru La Motte with her works Red Eve and Mother and Child. Photograph courtesy the artist. 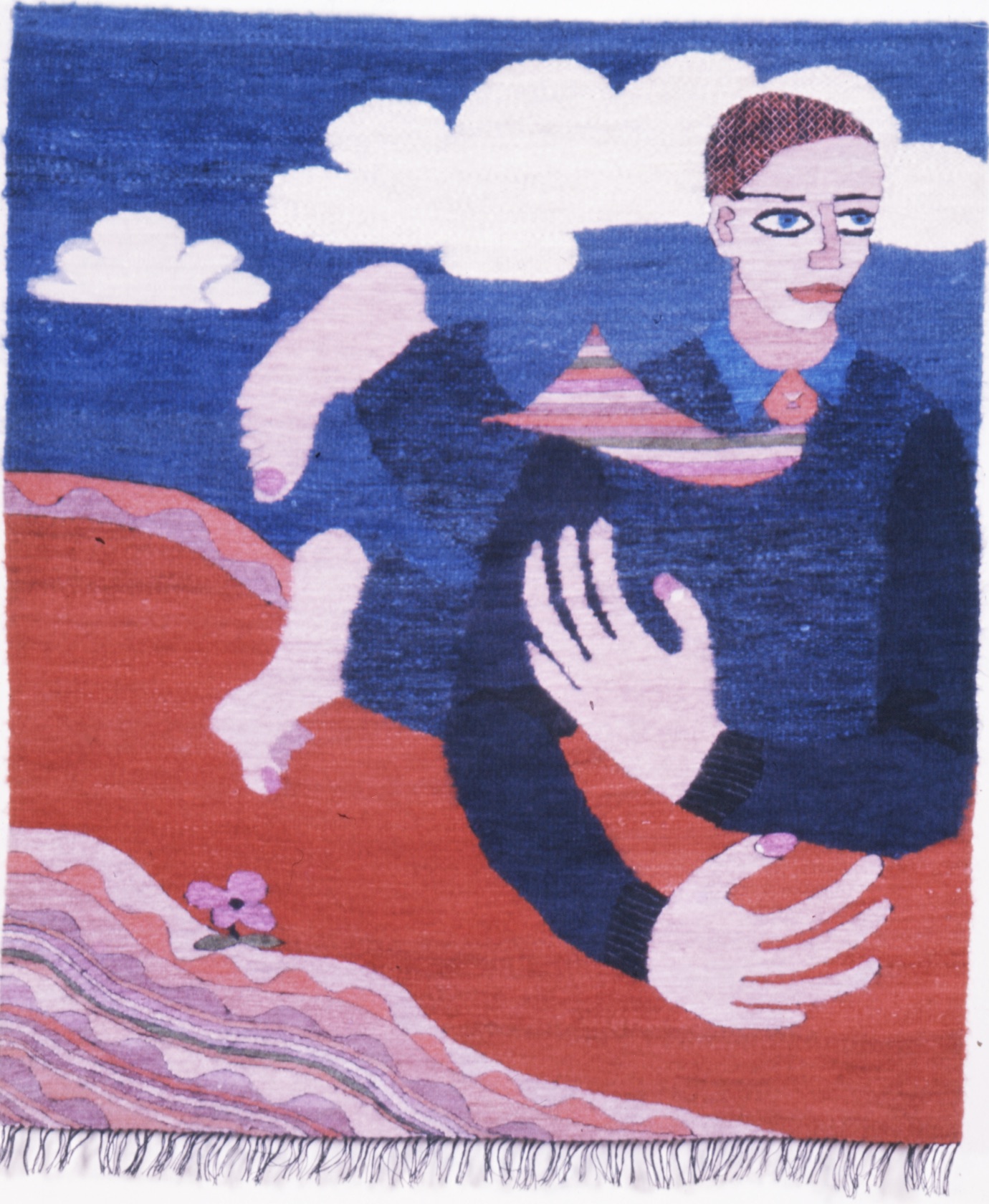 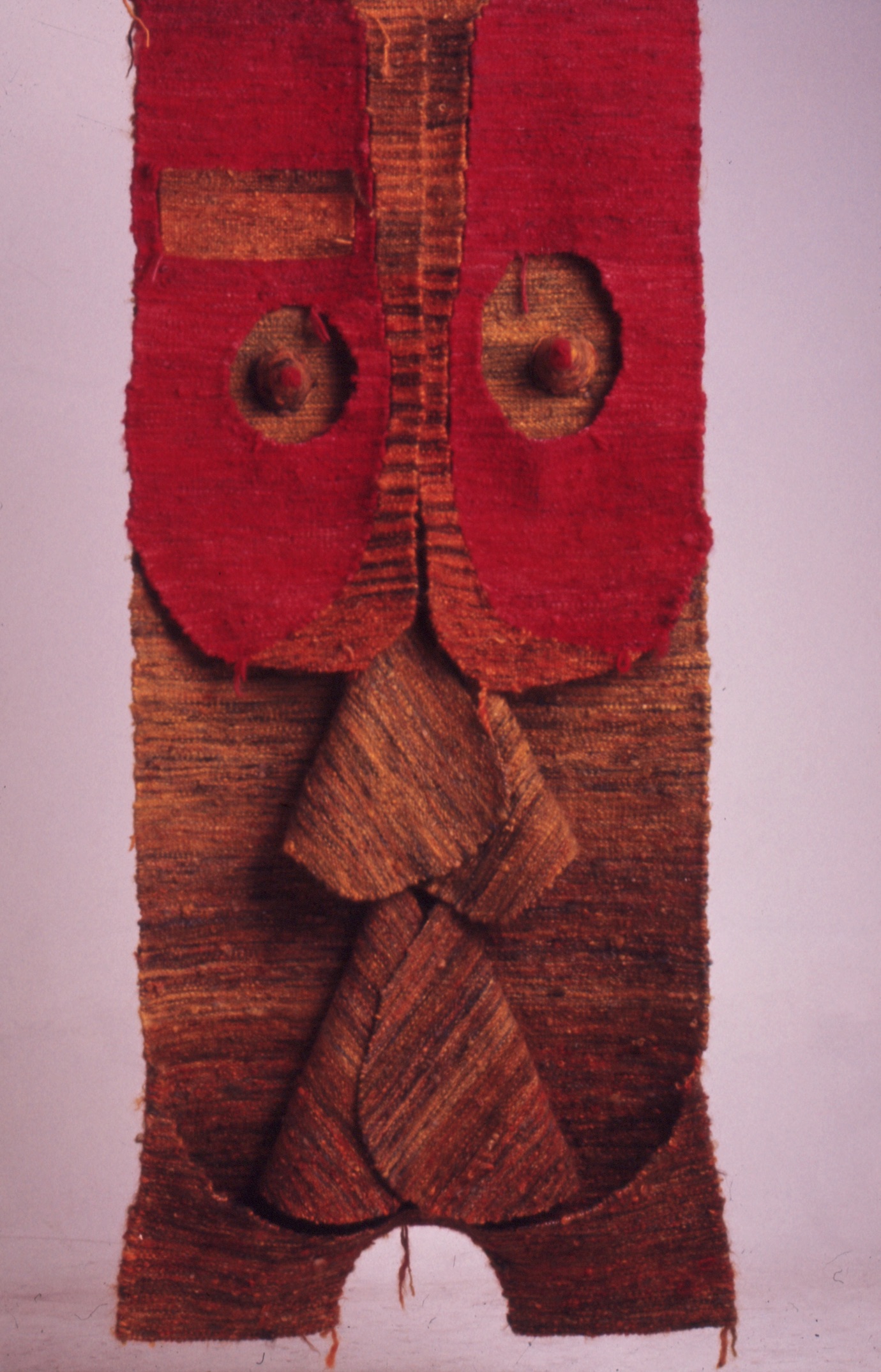 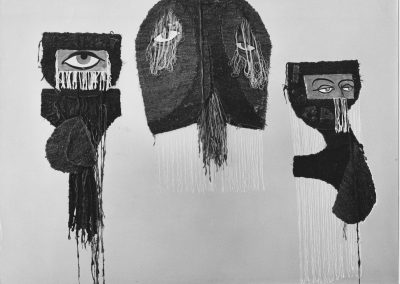 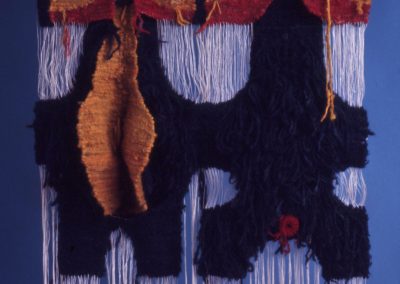 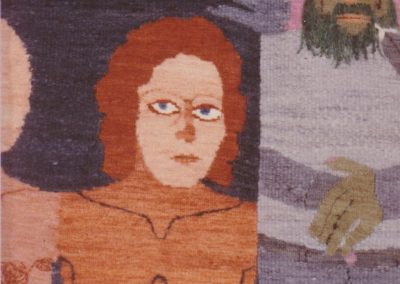 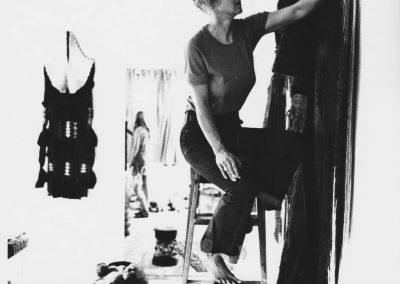 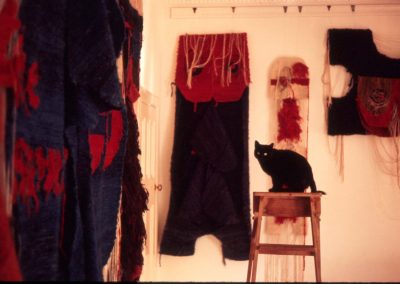