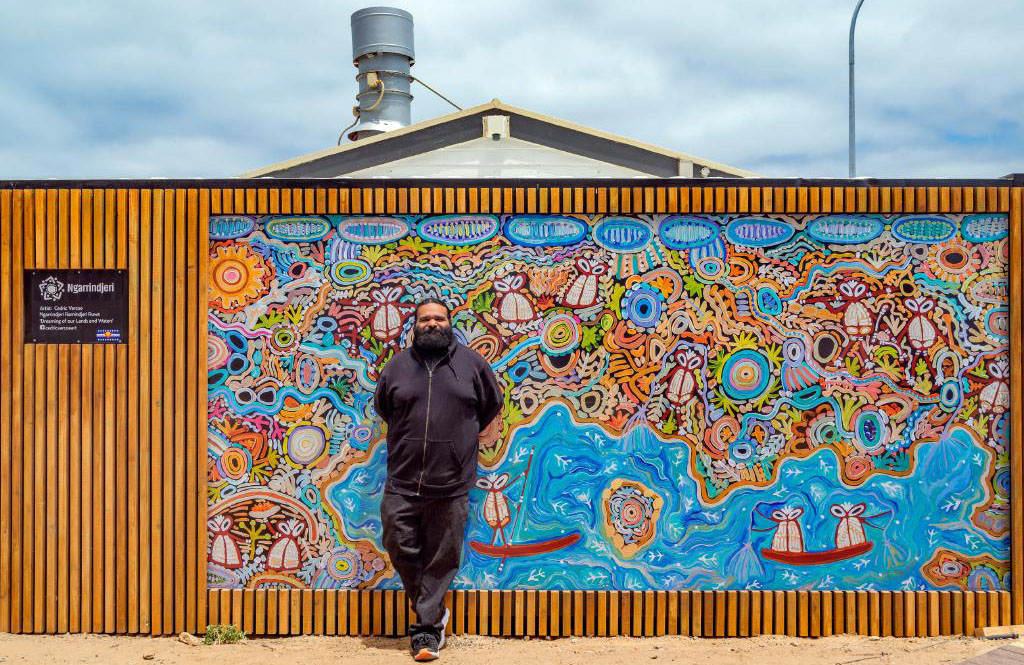 CSIRO and Guildhouse have come together to present the CSIRO Waite Campus Artist in Residence program for Aboriginal and Torres Strait Islander artists.

The residency includes a studio space on site at the CSIRO Waite campus, allowing for the artist and scientists to engage in ongoing and regular conversations about agriculture, culture and science. This exchange of knowledge will culminate in an outdoor mural situated on site.

The inaugural artist for the CSIRO Artist in Residence program is Ngarrindjeri and Narangga artist Cedric Varcoe who has experience in both community education and consultation, as well as extensive experience in mural design.

Cedric Varcoe was born in Adelaide in 1984 with strong family connection to Raukkan and Point Pierce. His language groups and tribes are Ngarrindjeri and Narangga.

Cedric Varcoe is a contemporary artist, painting the creation stories of his Ngarrindjeri lands and waters, from the lower River Murray and the Lower Lakes to the Coorong, the South Coast to Kangaroo Island.

He started painting at the age of eight, watching his sisters and mother, aunties and uncles. Fascinated by paint, he mainly painted lizards and snakes, and developed highly stylized corroboree men.

Cedric Varcoe has painted on and off for over 15 years. In 2008 he completed a mural in one of the cells at the Port Pirie Police Station, hoping to inspire young people who are getting arrested, to try to help them to have a better outlook on life, to think that they might be able to paint and express themselves creatively.

In 2015 an Arts SA ATSI development grant supported him to research and learn new techniques working with a range of colours. He also has worked extensively across community arts projects in regional South Australia.

Cedric Varcoe has teamed up with Better World Arts, which has supported him to display his works in galleries across Australia and to sell his work globally. Together, they also developed a series of innovative point of sale artefacts, ranging from printed ceramics to handbags, featuring his unique designs. As a result, he is able to support his work and his family as a proud, contemporary Ngarrindjeri artist.

Cedric Varcoe’s work is held in private and public collections across Australia and overseas. In 2010 and 2014 he won the Port Augusta ‘Malka Art Prize’.