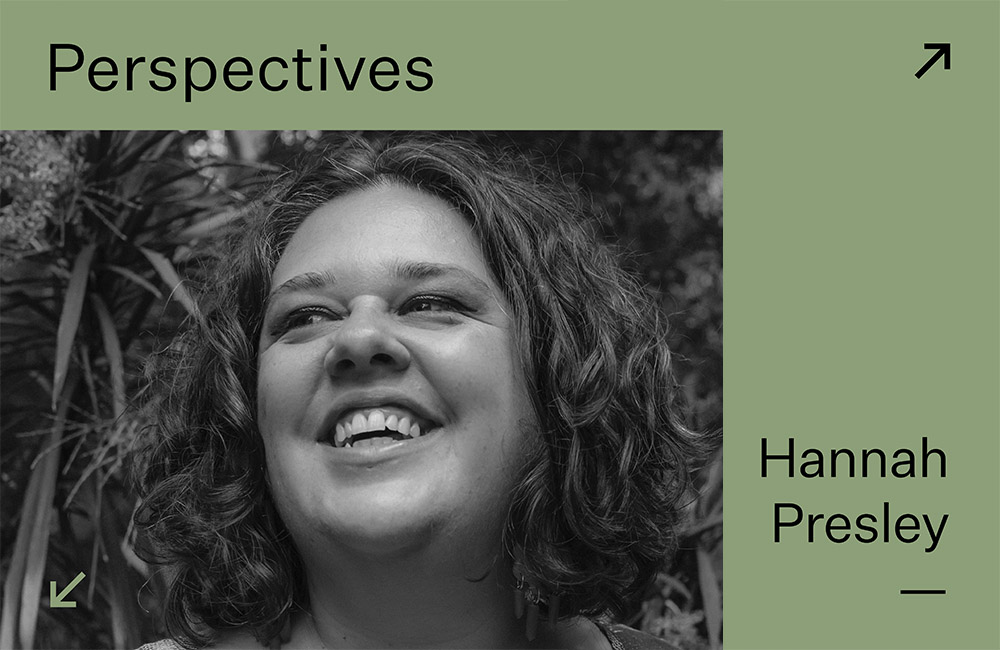 Hear from some of the leading cultural minds of our time in Perspectives: shaping the world through visual culture, an initiative developed by ACE Open, Guildhouse and The Bob Hawke Prime Ministerial Centre, University of South Australia. This annual series of thought-provoking lectures invites leading artists, makers and thinkers to Adelaide to engage with the compelling ideas currently shaping our world.

This session will be delivered via online broadcast.

Melbourne based Aboriginal curator Hannah Presley presents her inter/national curatorial approach that has guided her through working with individual artists, community groups, not-for-profit galleries, international art Biennales and national institutions. Presley shares her belief in the central role of transparency, vulnerability and humour in forming valuable relationships with artists, and will examine the deeper values that inform her practice. Known for exhibitions and projects that present meaningful connections between people and place, Presley will examine the deeper values that inform her work and demonstrate how thoughtful communication can be a powerful practice.

This event is presented as part of Tarnanthi: Festival of Contemporary Aboriginal and Torres Strait Islander Art.

HANNAH PRESLEY is an Aboriginal curator based in Melbourne. She is a Director of Agency and was most recently curator of Indigenous Art, National Gallery of Victoria. Presley was the inaugural Yalingwa curator at Australian Centre for Contemporary Art, where she curated A Lightness of Spirit is the Measure of Happiness in 2018 and was First Nations Assistant Curator for Tracey Moffatt at the 57th Venice Biennale.Her practice focuses on the development of creative projects with Aboriginal artists, working closely with artists, learning about the techniques, history and community that inform their making to help guide her curatorial process. Presley draws on inspiration from her early roles working at Warumpi Arts, with Papunya Community, Iltja Ntjarra, Many Hands and other Central Australian Art Centres. As Exhibitions Officer at Araluen Galleries, in Alice Springs, Presley had the privilege of coordinating a number of shows including the annual Desert Mob exhibition. After attaining her Bachelor of Visual Arts, Photography, (LaTrobe), she completed a Curatorial Residency through Creative Victoria, curating the 2012 Victorian Indigenous Arts Awards. Presley has since worked in curatorial roles with the Koorie Heritage Trust, Footscray Community Arts Centre and Craft Victoria, also initiating and coordinating the Victorian Aboriginal Weaving Project across a number of years. Presley completed her Masters of Arts Management (RMIT), with distinction, in 2014. Recent curatorial projects include Every Second Feels Like A Century, West Space, Melbourne (with Debbie Pryor); Weaving Country (with Vicki Couzens), Footscray Community Arts Centre, Melbourne (2017); Hero Worship, Craft, Melbourne (2016) (with Debbie Pryor). In 2016, Presley was awarded Best Emerging Curator at the Melbourne Fringe Festival.