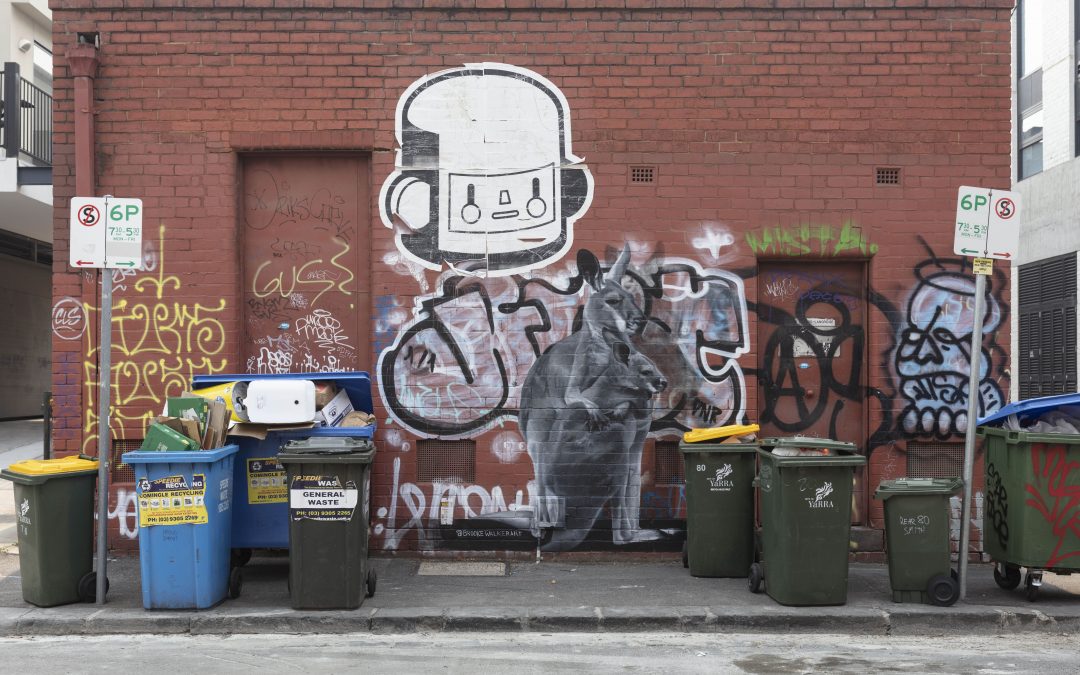 Brooke Walker is passionate about wildlife conservation. Her vision is to place often overlooked animals back into cities through engaging street art, encouraging the viewer to notice and interact with them day to day. She has been undertaking a CATAPULT mentorship with experienced street artist Tyrone ‘Rone’ Wright to help her do just that.

We interviewed Brooke about her experience of the mentorship and the impact it has had on her practice so far. 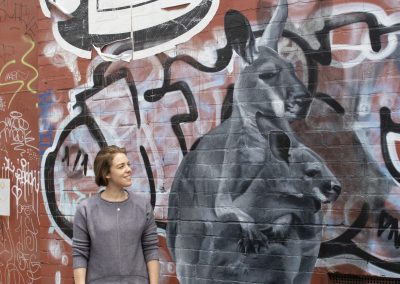 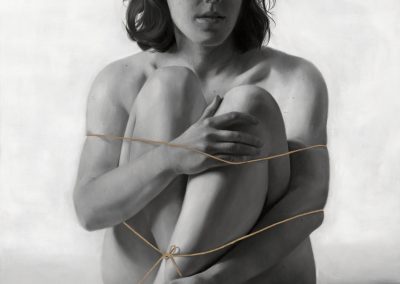 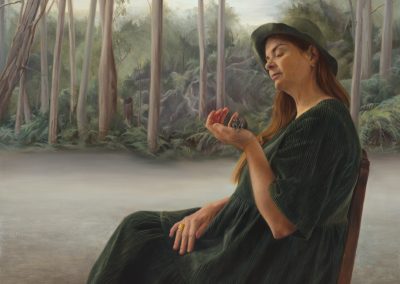 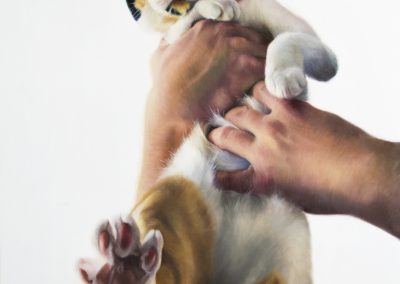 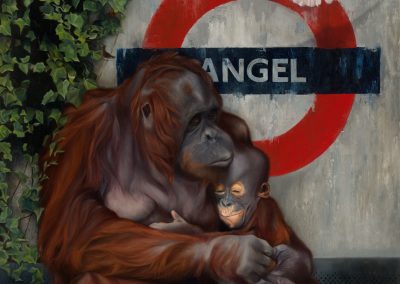 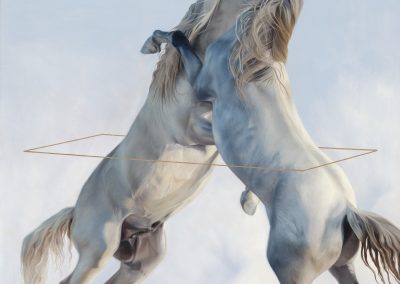 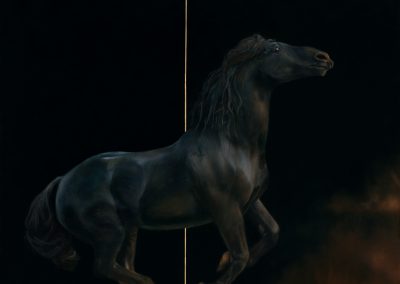 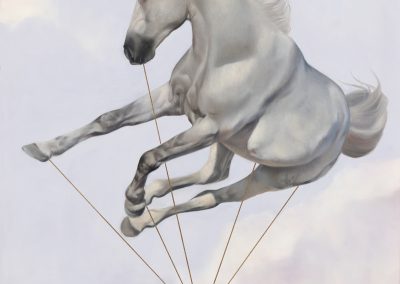 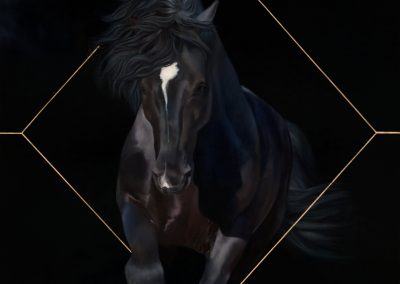 My artworks give a voice to the voiceless. I have a passion for wildlife conservation and a desire to understand the intricate nuances of the human/non-human animal relationship through my arts practice. This love of wildlife was created and nurtured during childhood surrounded by animals on a hobby farm in McLaren Vale, South Australia.

I work predominantly in oils and charcoal in a representational style creating highly detailed pieces to hang on interior walls. I feel there is widening dissociation between populated cities and the greater environment and as a result want to bring nature back into the everyday lives of people.

What were your aims for your practice when you applied? Did they change during the course of the mentorship?

The intent of the mentorship was to expand my arts practice into the public art domain through exploring the creation and logistics of large scale painted murals. This method of artistic expression was unfamiliar to me but the mentorship offered a valuable opportunity to pursue a new direction that will be complimentary to my existing studio works. It will extend my artist profile to a larger audience and offer the ability to employ an alternative medium in order to create a sustainable arts career.

The aims of the mentorship didn’t change throughout the course of the mentorship. I think because it was conducted as a masterclass in Rone’s studio in Melbourne for 5 days consisting of 3 mentor contact hours per day, there wasn’t a need to sway from the original plan. During the studio visit I observed Rone’s professional arts practice and gained insight on the process and business behind of creating a large scale mural. Rone had organised a wall for me to paint on, ahead of time, so I was able to jump straight in. This included planning, experimenting with different applications and a general ‘how to’ in creating a public art mural and the challenges faced with working outdoors. During the masterclass we also discussed liaising with councils and public arts bodies, funding opportunities, making a sustainable career and the complexities of creating public art abroad. The non mentor contact time allowed me the time to create a finished piece.

How did you decide on and approach your mentor?

In my decision to approach a mentor I knew I had to expand my horizons and step outside of my comfort zone. I have a vision to place often overlooked non-human animals back into the cities through engaging street art, encouraging the viewer to notice and interact with them day to day. Street art has historically been a tool for change, a place to advocate and express personal, social and political opinions. Public art and murals have had such a growth in popularity and acceptance in recent years, the mentorship seemed a perfect fit.

I asked Tyrone ‘Rone’ Wright to be my mentor as I have followed his work for sometime, I like his style and concepts and also the fact he doesn’t use aerosol cans to produce his work, making his process more environmentally friendly. Rone has crafted a career from his mural works and has had a full time arts practice for over 10 years.

I approached Rone through a simple email, I listed my intentions for the mentorship, explained why I thought we would work well together and a couple of images of my current works. Rone rang me back that very same day to say yes, he’d love to be involved in the mentorship. We were both quite busy with upcoming exhibitions and overseas travel we decided on an ‘intensive masterclass’ style mentorship consisting of 5 days in his Melbourne studio at the beginning of January 2020.

What aspect of your mentorship has had the biggest impact so far?

I really feel that the catapult mentorship has fast tracked my understanding of creating large-scale murals. In 5 days I learned what would have taken me months to discover if I was developing the skills on my own. I now have contacts within the industry and the opportunity to speak with Rone about any questions that I may have regarding upcoming mural projects etc. I am very grateful for Rone’s generosity as a mentor.

What advice would you give artists who are considering undertaking a mentorship?

The advice I would give to artists considering undertaking a mentorship would be to push outside your comfort zone and try something new. Don’t be afraid to ask someone you really look up to, to be your mentor. In my experience artists want to help other artists, especially when they can see the passion in their arts practice and courage to progress their careers. Furthermore be open and willing to expand your knowledge, accept feedback and be flexible and courteous with the mentors time.

Learn more about CATAPULT
Video: Brooke Walker on her CATAPULT mentorship with Rone.

Brooke Walker’s artworks give a voice to the voiceless. Her passion for wildlife conservation and desire to understand the intricate nuances of the human/non-human animal relationship inspires her arts practice. This love of wildlife was created and nurtured during childhood surrounded by animals on a hobby farm in McLaren Vale, South Australia.

In 2009, Walker graduated from UniSA with a Bachelor in Visual Communication (Illustration Specialisation) and has since continued her artistic studies and skill development through workshops held by Robin Eley of the Art Academy South Australia. In addition, she has sought painting technique mentorships by American painters David Kassan and Shana Levenson.

Not content with being a traditional wildlife artist, Walkers’ new works blur the lines between the real and surreal. She takes inspiration from historical research and symbolism, current environmental issues such as climate change and urban sprawl and her interest in animal social sciences. Her artworks are intertwined with deep empathy and an emotion that is hard to conceive in the written word. Above all, it is her goal to create beautiful, thought provoking imagery to encourage empathy and discussion in order to entice change in the human attitudes towards non-human animals.

As part of her ongoing practice Brooke Walker donates a percentage of artwork sales directly to reputable wildlife conservation charities. She has also donated works to raise funds for the Explorers Against Extinction Foundation in London and the Australian Rhino Project in conjunction with Zoos SA.

Finding the friction point between beauty and decay is a thread that runs through much of Rone’s work. As a street artist best known for his haunting, stylised images of women’s faces, he understands better than most that beauty can be fleeting. Seeing his artworks gradually worn away by natural and human elements has taught him to appreciate the unexpected beauty of an image as it begins to blend back into its more prosaic surroundings.

Rone has gone from spearheading Melbourne’s fledgling street art movement in the early 2000s, as a member of the Everfresh crew, to being a celebrated fixture on the international street art scene. An inveterate traveller, his distinctive female muses have followed him around the world, and can be found – in various states of decay – peering out from beneath overpasses and emblazoned on walls everywhere from New York to New Zealand and many places in between.