The Collections Project: The Botanic Gardens and State Herbarium of South Australia, at the Santos Museum of Economic Botany 2023 Call Out 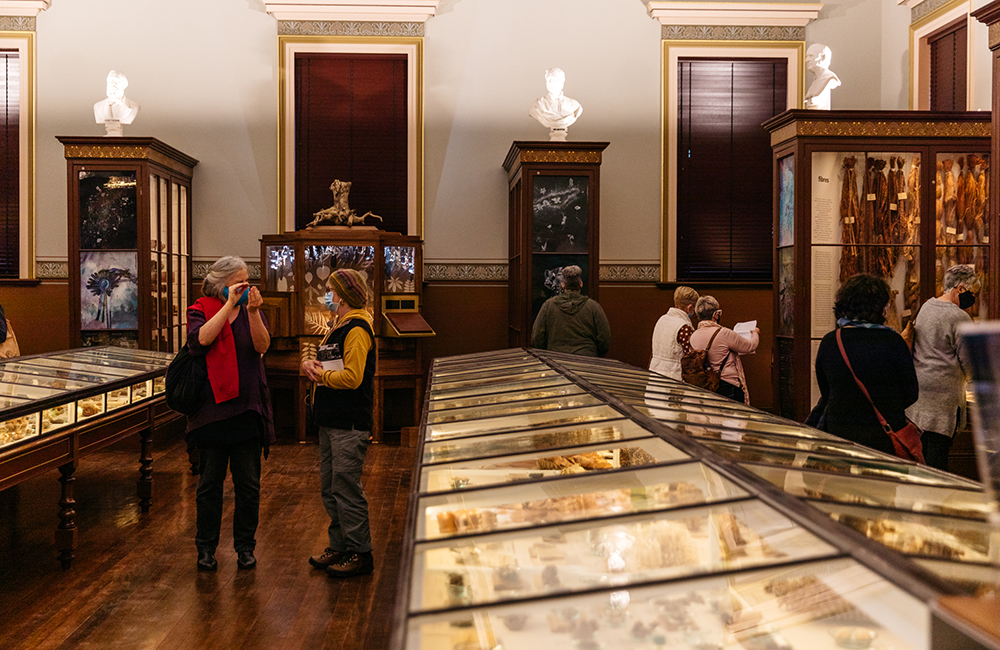 The Collections Project with The Botanic Gardens and State Herbarium of South Australia, at the Santos Museum of Economic Botany

Research within the Santos Museum of Economic Botany Collection and the broader Botanic Gardens and State Herbarium collections.

Beginning in July 2023 the research period will allow time for an artist to create responsive new work for exhibition in early 2025.  While exhibitions are usually installed in the MEB’s contemporary space, we strongly encourage artists to think about installing works in any part of the Garden, its heritage structures, or even amongst the historic displays of the MEB itself.

The exhibition will be accompanied by a printed catalogue, as well as digital documentation of the project and its creative processes and outcomes.

For more information, register for an Artist Talk and Call Out information session featuring 2022 recipient Kasia Tons discussing her exhibition Biotic Commune within the Museum, followed by a conversation with Museum and Guildhouse staff around the current call out process, project outcomes and collection areas on April 18, 11am (tbc) .

One of the project’s key objectives is to promote contemporary visual art, craft and design. The Guildhouse Collections Project provides a unique opportunity to promote our members to broad, new and diverse audiences and to bring new perspectives and understandings to our state’s cultural collections.

The core aims of the project are to:

About the Botanic Gardens and State Herbarium collections

The Botanic Gardens and State Herbarium (BGSA) manages living, cultural and preserved collections and through its science and research enriches understanding and appreciation of the botanical world.

The BGSA engages with the wider community to share stories about plants and enhance appreciation of the crucial role plants play in sustaining life, and as a key part of our cultural identity and social fabric.

The Museum of Economic Botany is a ‘museum within a museum’ – a display of plants and the products derived from them, that were considered useful to humans in the 19th century. We strongly encourage artists to interrogate, subvert and challenge the themes and objectives of this display.  In an era of climate crisis, what would a collection of useful plants look like, how can humans be useful to plants, how does this collection reflect First Nations’ knowledge of Country, how does it reflect the broader imperial agenda of exploiting colonised nations?

In support of the Guildhouse Collection Project, the Botanic Gardens and State Herbarium also invites artists to view our collections through the lens of our developing Interpretive Masterplan

Theme 1: Relationships between people and plants
This theme explores humanity’s innate connection with the living world. It reflects on how humans have relied on plants throughout time and how plants may hold the answers to our survival. It looks at plants as a key food source, as a source of medicine and the many cultural uses of plants including First Australians’ connection to Country

Theme 2:  Ecosystems and biodiversity
This theme explores the complex and changing nature of ecosystems. From looking at the ancient landscape shaped by climate, fire, continental drift and human impacts to exploring the role of pollination as a vital life cycle process. It also explores the preciousness of water and the critical role that soil plays in a sustainable world.

Theme 3: Evolving research
Evolution operates on multiple timescales. Our knowledge is no different. This theme celebrates the critical role botanical science plays in benefiting the community and highlights the importance of taxonomy as a fundamental scientific discipline.

In the context of these themes, the artists are invited to research and develop new work by accessing the living collections, and collections held by the Museum of Economic Botany, State Herbarium and Seed Conservation Centre. The artist will also have access to horticultural staff who curate the living collection and scientists and researchers from the State Herbarium and Seed Conservation Centre

The BGSH Living Collection
The Botanic Gardens and State Herbarium is the custodian of a unique living plant collection, representing 128 countries from around the world and housed across three gardens Adelaide Botanic Garden, Mount Lofty Botanic Garden and Wittunga Botanic Garden:

Adelaide Botanic Garden
Adelaide Botanic Garden was opened to the public in 1857.  Its mix of British, French, German and Dutch styles are reflected in the heritage of the buildings and landscapes. Many of the glasshouses grow collections that provide access to plants rarely seen in South Australia such as the Madagascan Collection in the Palm House and the South American plants displayed in the Amazon Water Lily Pavilion.

Mount Lofty Botanic Garden
A cool temperate Adelaide Hills garden, Mount Lofty was opened to the public in 1977. It now holds a wide selection of exotic taxa and natural stands of Stringy Bark woodland—an icon of the Mount Lofty Ranges. As well as Australian natives, the site takes advantage of the Hills’ cooler climate to grow exotic and rare collections of Rhododendrons and Magnoliaceae.

Wittunga Botanic Garden
Wittunga Botanic Gardens opened to the public in 1975. Originally a private garden established in 1902 by the Ashby family, it displays Western Australian (Kwongan) and South African flora (Fynbos) The garden holds many Western Australian trees and large shrubs, many associated with the original owners. The garden also includes plantings reflecting Alison Ashby’s legacy as a plant expert and botanical artist.

The following activities will be undertaken by the recipient

Research, development and production of new work should be undertaken over an extended period. This will enable the selected artist/s to produce thoughtful, high quality creative outcomes that reflect their extensive engagement with the Botanic Gardens and State Herbarium. The activities undertaken during this period will include:

The Exhibition
The new artwork produced will be presented within the contemporary gallery space  of the MEB  or other areas of the Garden in March 2025.

Documentation
Guildhouse will commission professional documentation of the work and/or exhibition for the purpose of promoting the artist, their work and the program.

Public Programs
The exhibition will be supported by artist talks and public programs. These activities reflect the project’s ideas and creative processes.

Evaluation
Guildhouse will evaluate the project to assess outcomes. Participating artists will contribute to this process by producing a short report at the completion of their project.

Applications must be made via the online application form and must include:

Artists are strongly advised to discuss their proposals with Guildhouse staff before making an application.

Book a 30 minute Zoom or phone appointment with Guildhouse Artistic Programs Manager to discuss your application using the link below.

Appointments are available on:
TBC

If these appointment times are booked out or unsuitable, please contact the Artistic Programs Manager on 08 8410 1822 or guildhouse@guildhouse.org.au to set up an alternative time.

All enquiries regarding The Guildhouse Collections Project application process should be directed to Guildhouse.