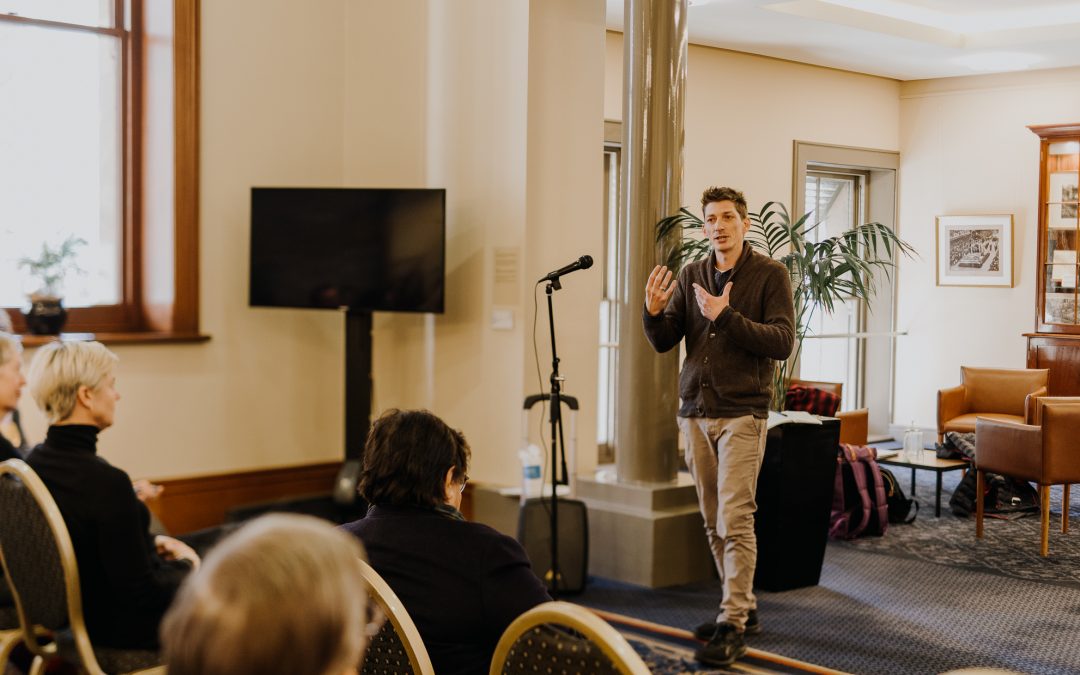 This piece of writing emerged from a discussion with Artist in Residence Rebecca McEwan, as a part of my preparation for a philosopher’s talk for the exhibition Biophillia, where I posed the question ‘Is Nature Conscious’. I wanted to explore the ‘point of view’ that a body of water might have of the world and whether I could coherently imagine what it might be like to be a body of water, as a conscious self-aware entity capable of conceptualising in some sense. – Connal Lee

It lies on my skin and stares at me. It is lifeless and has not yet started to regenerate. Its cycle is underway, but no tangible difference has occurred yet. At this stage, the creature lying on my body is like those metal shards and spheres that collect below me. They crack and split open a little, they turn a faint mustardy shade, they threaten to break down and disappear into the earth upon which we all sit, but they do not. The eyes of the unusual creature are sad. I have tried talking to it, but it will not answer. It is like the winged creatures that sometimes drift across me, bedraggled and flightless. Their eyes are like tiny black beads. There is no flicker of life behind them. I will call them dead. The body of the animal before me is bloated. Its skin is pale with blotches of purple. There are tiny red constellations across the pale flesh. The eyes are lacking that flicker. I will call this thing, dead.

At first, I tried to talk to it. I asked it what its name was and why it was here. I have seen this type of animal before. They lie on the hard land that runs alongside me and breathe out smoke on days when the air is calm, and the light is bright. Fluffy clouds drift slowly across the sky and these animals chatter and bark and exhale plumes of vapour into the sky. They talk into their hands and wave their arms around as though their gestures have meaning. They throw their heads back and screech with laughter. This one here has strayed from its pack. It has become lost and found its way to me. Unaware of its presence I have, without intention, suffocated the poor beast and now here it is bobbing up and down on my body as though we are one.

Its flesh feels strange against mine. We do not mix together. Its flesh is like that black syrup that drips from the hard metal objects that soar violently across me on those days when the animal’s breath fire. They assault my skin with their vessels and a strange heavy oil creeps from them and into me, but it never mixes. This body on top of me is not assimilating. It pushes against me. It resists. We are made of different things. I do not know what it is like to be this creature and it does not know what it is like to be me.

I study its face. The sharp pointed nose of the creature. Its pink lips. Its jaw. We dance gently in the cool crisp morning when the soft wind rocks my body. We are moving together in a rather pleasant embrace. I am holding the creature while it waits to transform. It must, like me, go through some sort of cycle. Nothing comes from nothing. In the warmer months, the rays of light make my skin warm and my outer layer dissolves. I reduce down after filling up during the colder days. On those days, the sky cries into me and I burst over the landscape. The winds become violent, and the rain violently crashes into me, and I bubble and fill and then overflow onto the hard ground around me. It is not unsatisfying. It is all part of my cycle. I fill, I settle, I dissolve, I settle. I move from place to place, my massive consciousness spreading from the skies to the puffy clouds, to the sewers and the lakes. I converse with those parts of me that have ended up in the artificial lakes and dams and the bellies and veins of the animals. We talk across the vast plains of existence. I am both here and there and each aspect of me connects to the other meaning that I am all water. Despite our being pulled apart by the seasons and passing though the bodies of the earth’s beasts, we re-connect eventually. This section of the river has been through many iterations, why just last week this bit of the shoreline was inside a small hairy creature that lived nearby.

I look at the unfortunate animal floating on me. We drift together in the light. I am willing it to begin its transformation, but it seems unwilling or unable to commence. Heavy clouds gather behind this creature and for a moment it is cast in shadow. It will take as long as it will take.

In addition to completing theses at honours, master’s and doctoral level Connal Lee has published in several journals in the area of pandemic ethics. His most recent publication is in the area of art and health and the role of community gallery spaces as vessels of well-being promotion.

Connal is also a regular writer for The Conversation having written on ethical distribution of vaccines in a pandemic and the potential for an ‘infodemic’ during a pandemic; whereby the public is overloaded by information and misinformation. Connal has presented conference papers on pleasure and health, utopian thinking in political philosophy, and developing moral imagination through narratives. He is currently in the editing phase of completing his first novel, which explores philosophical themes associated with trauma, memory and the duty to rescue.