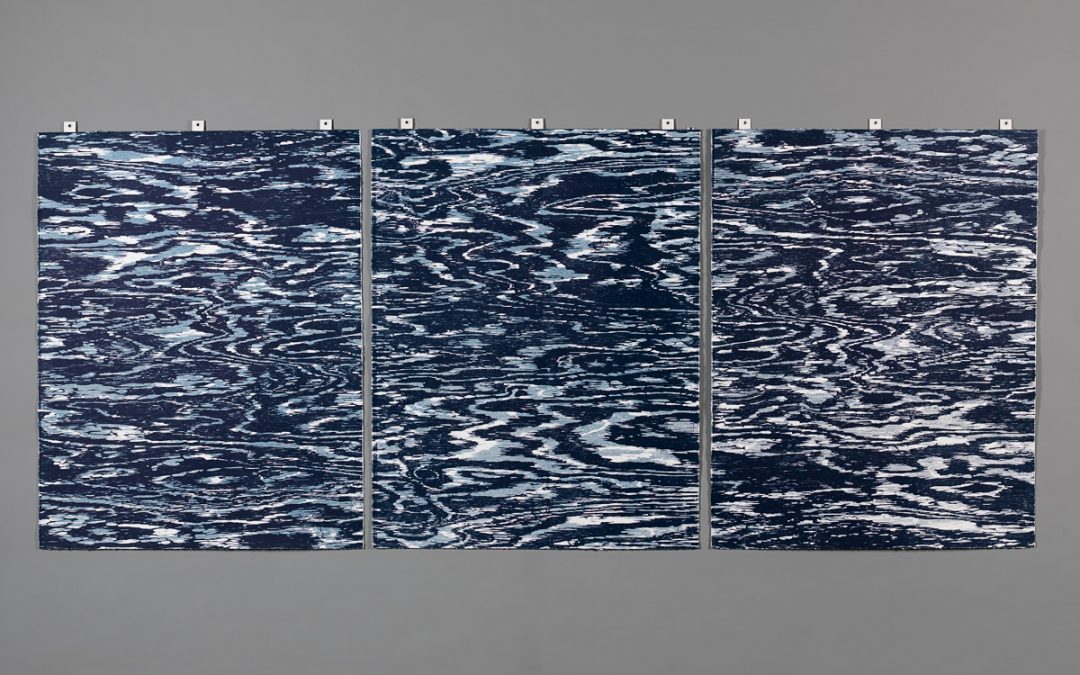 The exhibition was an extension of the Traditional Craft Skills workshop program which has assisted craftspeople from culturally and linguistically diverse backgrounds, in particular refugees, to continue with their traditional craft practices once settled in Australia. Over the years Guildhouse has facilitated a series of traditional craft workshops where these craftspeople have taught their traditional skills to members of the South Australian public. Workshops have included Iranian Inlay, Nigerian Indigo Dyeing, Bangladeshi Quilt Embroidery, Sudanese Beading and others.

Craft practices are integral to many cultures and this project emphasises their cultural and social significance while assisting members of emerging communities to reconnect with, practice and celebrate their traditional craft skills as well as enriching the practices of creative practitioners through the introduction of skills otherwise unavailable to them. Guildhouse recognises the importance of facilitating diverse creative projects, and by bridging the gap between our programs, culturally and linguistically diverse communities and other work practices, we aim to bring the work of creative professionals to new audiences.

This project has been supported by the Australia Council for the Arts, Arts SA, Multicultural SA, the School of Art, Architecture and Design (University of South Australia), History SA, the Oral History Association of Australia, South Australian Branch, the City of Charles Sturt and Next Byte Glenunga.

Lady Narvaez Peñaloza learnt to make Colombian mochilas (bags) from natural fique fibre string when she was a child. Her grandmother learnt these skills from her mother which she then passed down to her daughters. Later in life, Lady learnt the traditional forms of molas from an indigenous woman in Panama. While the experience led to new developments in her craft practice it was also tinged with sadness as many of the indigenous traditions are disappearing.

Jelina Haines migrated to Australia in 1997 from the Philippines. She is of Austronesian, Spanish and Malay-Filipino descent. She specializes in the field of textile and fibre art, weaving, costume design, printmaking, art management, cataloguing and the preservation of historical records for which she has been academically trained. Like Lady, Jelina was taught traditional Filipino weaving (fish trap making) from her adopted grandmother. Being an older sister caring for her siblings in a rural community in the Philippines, she also had to learn to make other practical products which were traded in the markets or swapped for food.

Their collaborative works were motivated by interest in acknowledging the multicultural diversity of Australia and the traditional customs of their distinct but interrelated cultures (both Lady and Jelina’s heritage share the influence of Spanish occupation). Their work incorporates culturally significant figurative images, motifs, colours, shapes and environmental elements and demonstrates their shared belief in the importance of maintaining their respective cultural identities and connection to the countries they call home while reflecting their new place in today’s world.

Milete-Tsega Ogbalidet, who is from Central Eritrea, learnt to weave the graphic, colourful designs of Eritrean baskets from her mother and other family members when she was a child. The baskets are woven out of brightly coloured wools wrapped around plant fibre and are primarily used for the storage and serving of food and as decorative objects. Since moving to Australia in 2003, Milete, who also runs a catering business and has been a leader within the community of Eritrean women in Adelaide, has taught her traditional skills through Guildhouse’s program of workshops.

Lisa Furno is a relentless collector whose studio is full of found objects from various jaunts to far away places that inspire her. Roaming the world is essential to the health of her practice and allows her to glean the vibrancy of people, places and cultures. She often uses unconventional found and discarded materials combined with toys, fabric, metals, thread, paper and wood while experimenting with the visual aesthetics of colour, repetition and movement. She takes pleasure in the reactions her work elicits, especially when observers are not always sure what the ‘lovely’ neckpiece they are looking at once was.

Both Milete and Lisa approached their partnership with the desire to move away from the familiar and try something new. Combining their skills, they experimented with natural materials to create lampshades with a handmade aesthetic.

Shima Gholami moved from Iran to Adelaide in 2009 to pursue her Doctorate in Australian Studies. She holds a Masters and a Bachelor of Arts from Azad University in Tehran, specialising in the traditional arts and crafts of Iran. She learnt the fine art of Persian illumination in her youth in the 1990s and wooden inlay by respected master craftsperson Soleiman Saeidabadi and practiced both on a professional level in her home country.

Adrian Potter is a designer-maker and artist whose work most often takes the form of furniture. He is also recognised for his public art, examples of which can be seen in and around Adelaide. A meticulous craftsman, with a background in mechanical engineering, Potter began making furniture after producing a series of guitars early in his career (1988-1990). Based on the elegant geometry of vintage harp guitars, these musical instruments are precursors of Potter’s later, more ambitious woodwork and furniture. In more recent work he has explored a dialogue between form, function and concept.

Shima and Adrian set out to make an object that combined their skills and diverse backgrounds. The fret-work was adapted from a carpet design that Shima worked on whilst studying at University and incorporates many traditional Persian motifs representing animals, plants and flowers.

Originally from Nigeria, Oluwole Oginni’s artistic gifts were noticed and encouraged from a young age. He began his art career as an apprentice in the workshop of a renowned textile artist, focusing on batik and tie-die. In Nigeria the art of indigo dying is kept secret and passed between generations. Oluwole’s knowledge of the process grew out of supporting the dyers who supplied the textile artists in the region.

Simone Tippett is an Adelaide artist who works with a variety of printmaking processes. Her passion is learning and sharing at a grass-roots level, working with traditional craftspeople, contemporary practitioners, emerging artists and the general community. She runs a weekly printmaking class at Union St Studios and worked for many years at local swimming pools. She is fascinated by water, and sees many parallels in the way water moves and the way people come together, mix and grow. She is a swimmer and occasional surfer. To her, water is a universal amniotic that soothes, nourishes and inspires.

When Simone became a regular participant in Oluwole’s Nigerian indigo workshops with Guildhouse, they discovered a synchronicity with the meaning and flow that water and indigo symbolize for each of them. Indigo Songs is an exploration of the strength and nature of indigo, reflecting the influence of both their Nigerian and Australian heritage through the use of traditional Nigerian Yoruba designs and new processes. Adire means unity in diversity and is a literal and metaphorical reflection of their creative collaboration.

Traditionally, Kantha embroideries were made by women in Bengal from recycled household textiles. Worn lengths of cloth were stitched together with running stitch to make durable quilts, or embroidered with symbolic motifs to mark life cycle occasions. Masuma Akther learnt to embroider from her mother in Bangladesh before training to be a teacher and completing a Master’s degree in Botany. After migrating to Australia with her family, the Traditional Craft Skills Project run by Guildhouse enabled her to teach her embroidery skills, along with a sense of their cultural context, to groups of women in Adelaide. This is where she met Kay Lawrence and taught her to embroider. Kay also trained as an art teacher before developing a distinguished career as an art educator and artist working with a range of textile media.

Their collaboration draws on the traditions of Kantha, translated into the context of their lives in Australia. Each artist has used scraps of left-over cloth to stitch images of Basha/Home. While Kantha embroideries often combine many images on one cloth, these embroideries have been stitched separately and grouped on the wall to create a combined story of the importance of ‘home’ in their lives. Masuma has stitched traditional Kantha motifs like the lotus and the peacock, as well as her memories of Bangladeshi village life. Kay’s stitched cloths are centred on the Uraidla oval, just down the road from her home. Ovals are often the centre of community life in Australian country towns, but they are also places where magpies forage and grasses flourish in spots that the mower can’t reach. 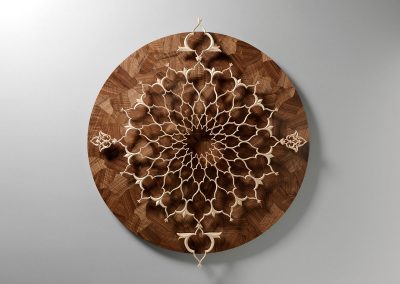 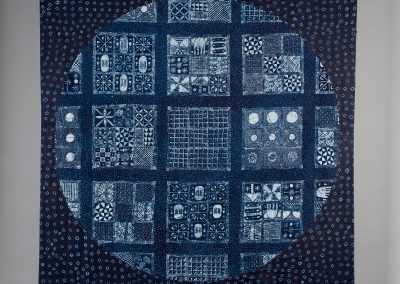 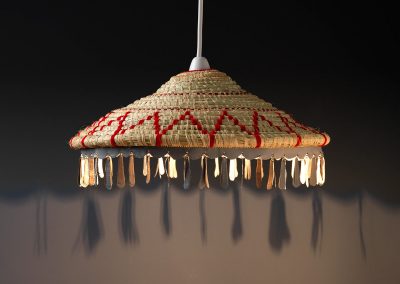 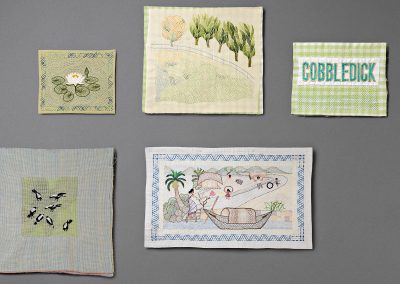 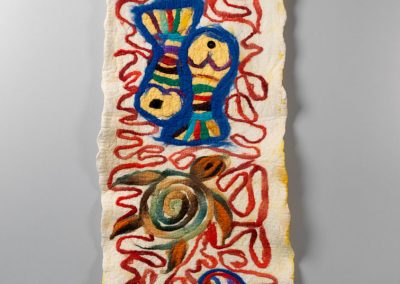