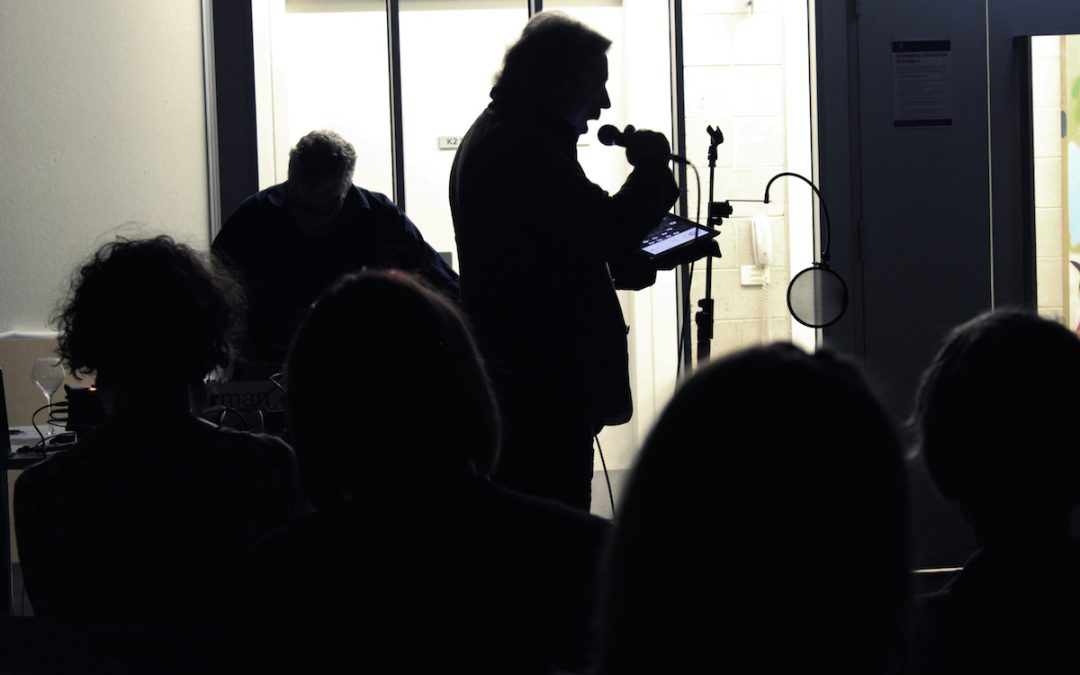 Guildhouse’s current series of mentorships culminated in dramatic style on 6 May 2019 with a collaborative sound art performance by mentor Johannes S. Sistermanns (Germany) and mentee Christopher Williams (Adelaide). Their performance, at the University of South Australia, emerged from a nine-day intensive program of experimentation and workshopping in which Sistermanns introduced Williams to his use of electronic transducers (exciters) to generate sound and his use of that sound to map architectural space.

Christopher Williams already has a very substantial practice, having been a producer of radiophonic works for many years, particularly with the ABC. But, having seen Johannes perform in Adelaide in 2017, he was keen to learn more of Johannes’s techniques so as to incorporate them into his own constantly evolving practice. In his written proposal for the mentorship, Williams indicated that his key goals were;

“To develop an understanding of the technical application of transducer technology in sound sculpture: especially experimenting with piezo speakers and exciters.  To experiment with new compositional approaches to the design of sound environments and soundscape installation.  To invite a composer and sound artist of international standing to my studio to carry out experiments in new approaches and creative techniques in sound studio practice. To benefit from the critical exchange through shared listening sessions to my own work and those suggested by Johannes.” 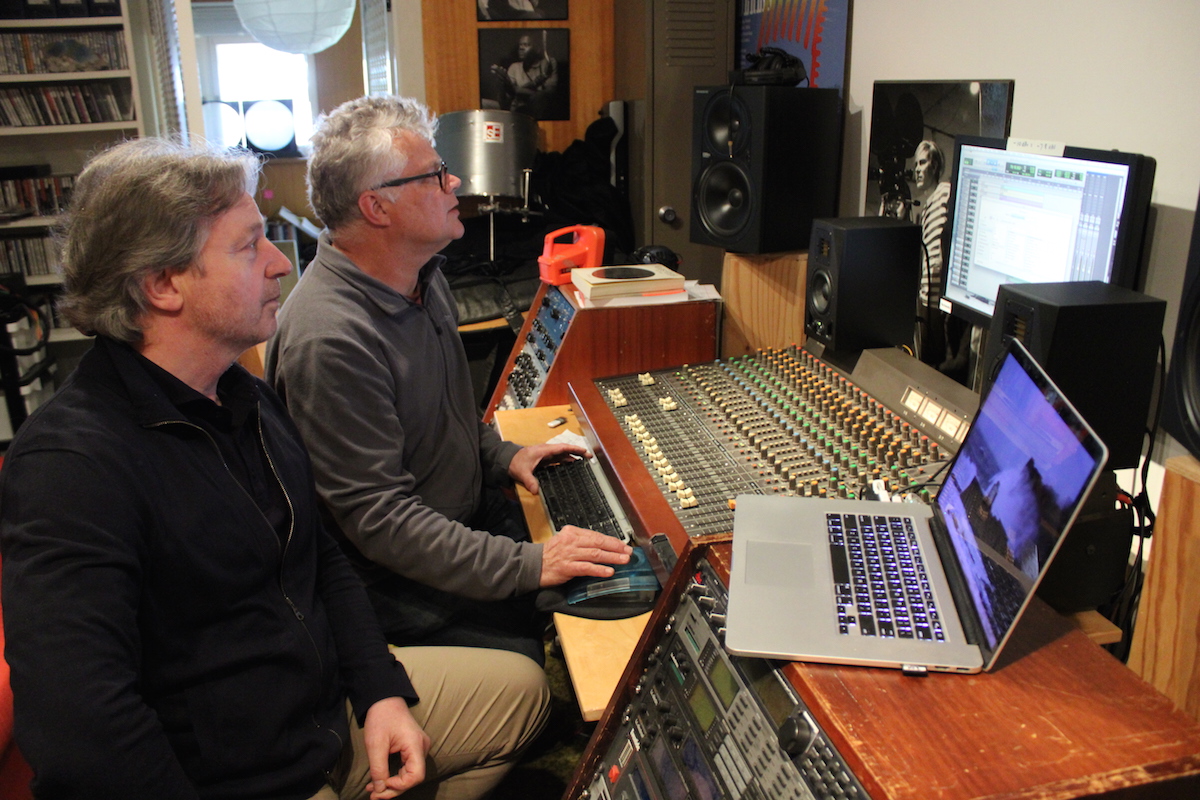 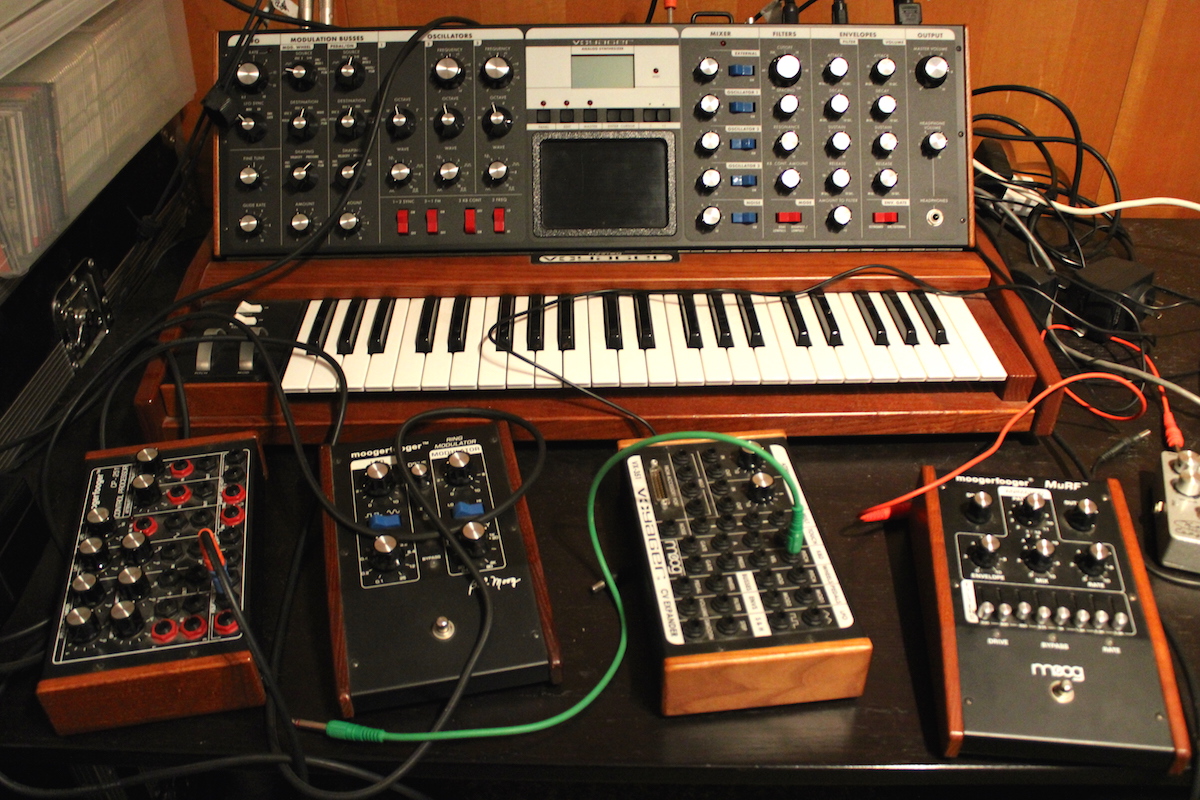 Mentorships are a vitally important form of professional development, and one-to-one teaching has traditionally been an essential element of the preparation of top-level musicians, composers and artists generally. It is expected that a mentorship will enable the mentee and perhaps the mentor to progress their artistic practice significantly.

I spoke with Johannes and Christopher on 27 April, at the commencement of their work together. Christopher had projects in train and he invited Johannes to respond to them and make suggestions and critical comments. Christopher said that;

“Working as an established sound artist, opportunities to engage with artists of greater or even equal standing are rare… When I met Johannes in 2017,
I recognised immediately that his interests and experience would make a unique fit with my own creative development needs at this time.”

For Johannes, mentoring is a positive experience and mentors can also potentially gain by intensifying their own practice. He suggested that there is a positive kind of friction — you get reinforced or perhaps even redirected in your own work. But it is essential that the mentor and mentee find a common wavelength, or the mentorship can fail. Undertaking it intensively (theirs fully occupied nine days) ensures that the interaction remains top priority for both participants
and the experience is not submerged by other demands.

Williams has himself been a mentor and considers that mentors must understand their own practice so as to be able to identify emerging points of difference that can precipitate artistic development. Johannes and Christopher did not work within a hierarchical relationship but as equals, they both mapped their experience onto each other’s and both reassessed their past experience and practices. Christopher wanted Johannes to help him reflect on which of the many threads of his practice should take precedence, but Johannes took the view that all areas are important as they cross-pollinate.

During their work together, they not only discussed sound art techniques, compositional methods and aesthetics, they also discussed the social aspects of sound. And they considered potential career paths and career management for the sound artist. 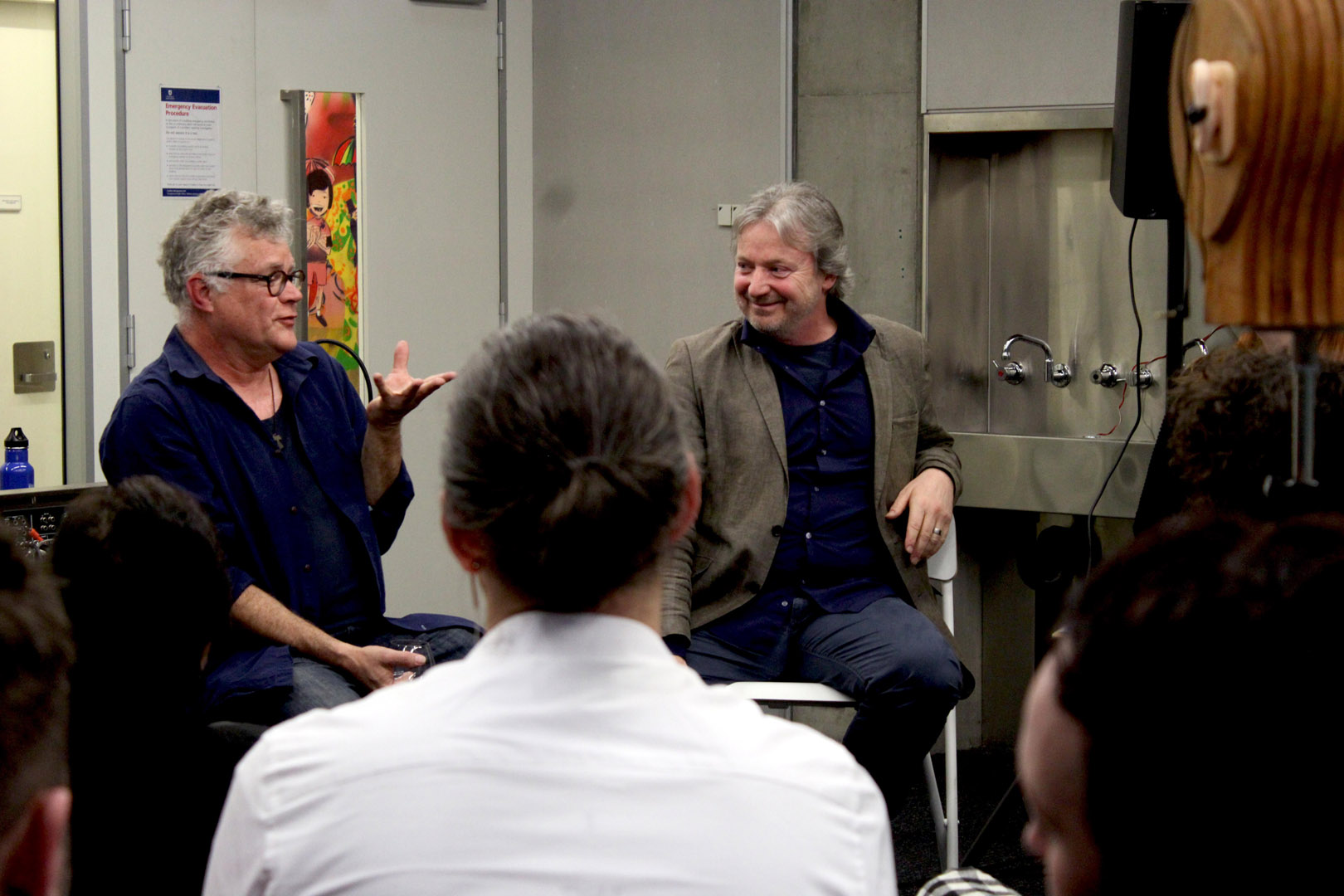 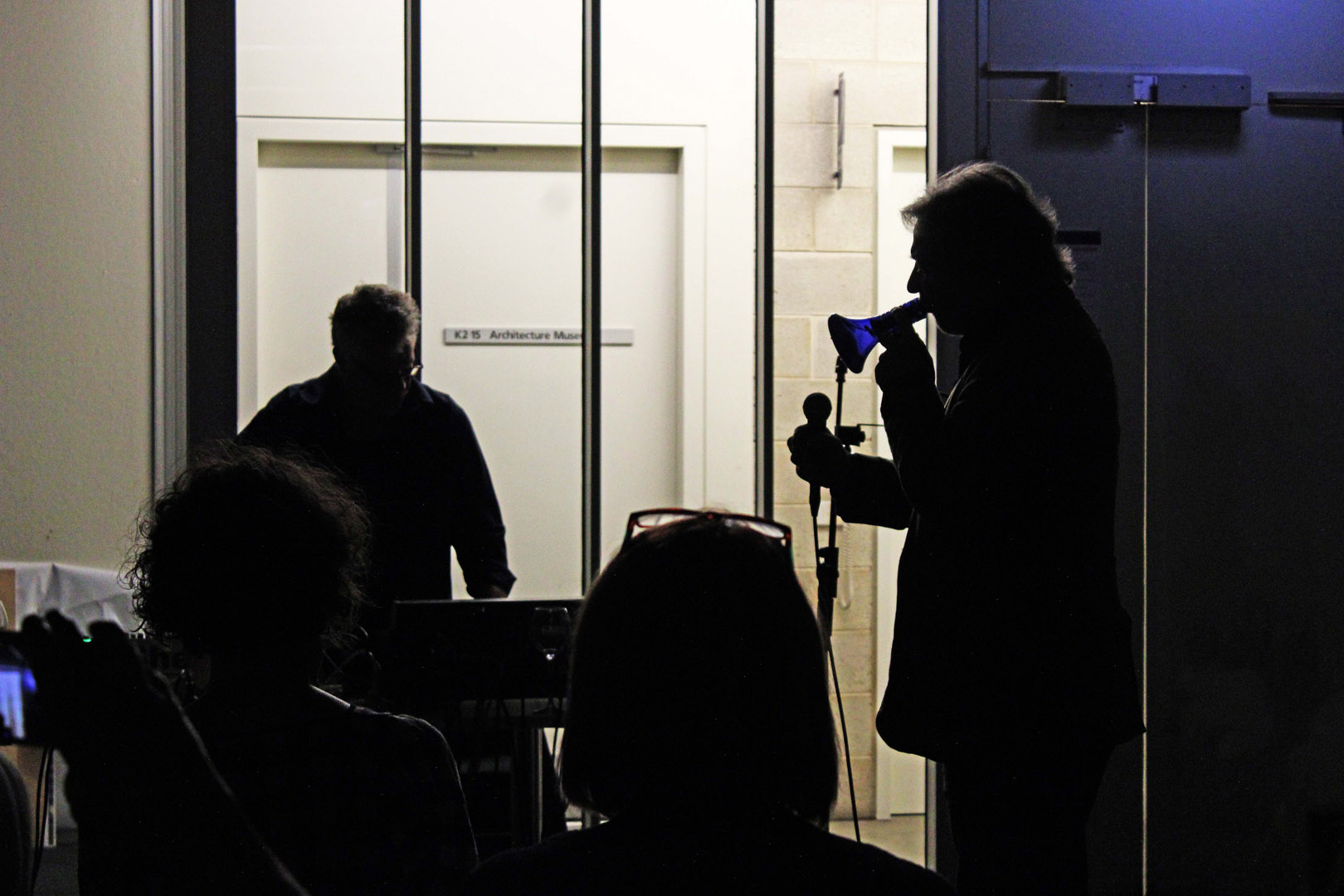 As to the realisation of his sound art events, Johannes takes an experimental approach, responding spontaneously to the sound of the space in which the performance takes place. At the live performance, they outlined their progress and performative approach and Williams emphasised that they tried not to define specific outcomes too closely in advance, instead allowing the ideas and the performance to emerge. In preparation for their performance, Johannes had placed transducers around the space, for example on a window and on a water heater above a sink. Christopher generated four channel sound using an analogue mixing console, modular filter and Moog phaser, and mixed in Johannes’s sounds and his voice.  The result was a complex, evolving soundscape that filled the room. They have also developed for future use a work based on recordings made at Christopher’s home during the development of the Guildhouse performance.

Because of its spontaneous nature, their performance is, technically, unrepeatable, but it is unrepeatable in the broader sense that it resulted from an intense program of work by two sound artists developing their first collaboration. The resulting sonic event was quite unique, not previously experienced in Adelaide, and represented a conceptual and technical development in sound art that adds to the genre.

Johannes reports that they spent more time together than initially anticipated, such was their level of energy and interest. They both found the mentorship very valuable and will continue to correspond. Christopher offers;

“The Catapult mentorship programme has afforded me the opportunity to undertake an intensive creative engagement with an internationally significant sound artist with an unequalled (in my experience) degree of overlap between our respective creative practices.  This has led to a fruitful exchange of ideas on technique, artistic purpose, and aesthetic philosophy.”

Christopher Williams is a joint artist-in-residence with Therese Williams at the Hampstead Rehabilitation Centre for the South Australian Living Artist Festival in August this year and and has been commissioned to produce a major public sound art installation in Melbourne. The mentorship has given him the confidence and skills to develop and realize these projects. Johannes intends to nominate their electroacoustic work for a major international sound art/new music award in Germany, the Karl Sczuka Preis.